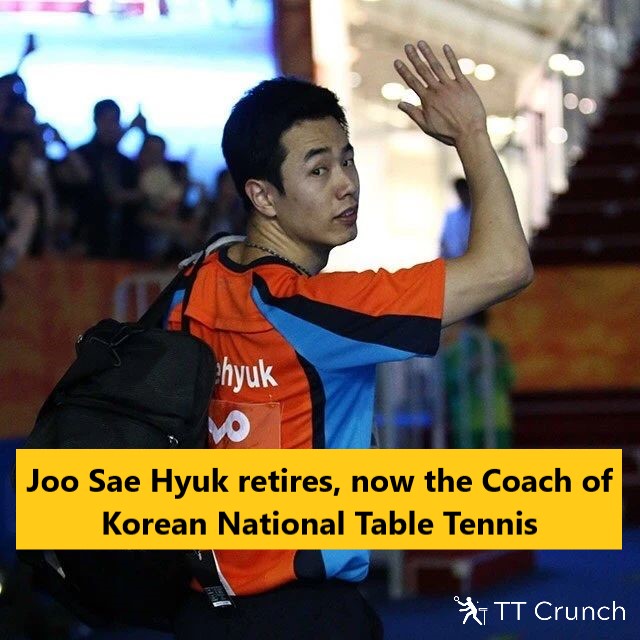 Joo Sae Hyuk of South Korea has officially retired from Table Tennis. Joo announced his retirement in an Instagram post.

Joo Sae-hyuk (주세혁) born 20 January 1980 is a South Korean table tennis player. One of the legend of Table Tennis, Joo is often referred to as the best defender of all time. He is one of the few top-ranked players in the world (position 5 in 2012) to play a primarily defensive style, repeatedly returning the ball with heavy backspin on both wings

Hello table tennis players and my fellow fans all over the world, unfortunately, I am about to end my 34-year career as a player. Retired after being appointed as coach of the Korean men’s national team in 2022 I am very sad and regretful now, but I have decided to take on another challenge for the future. I started ping-pong in 1988 and grew my dreams while watching great legends. Nam-gyu Yoo, Taek-su Kim, Waldner Persson, Gatien, Roskov, Primorak, Save Gonglinghui, Ryuguo-ryang, Dingsong, Matsushida. Later, when I lived and played in the same place with these legends, it was a feeling and joy that are difficult to express in words. I miss the old memories very much now. My family when I was good and when I was bad. around. to life. Thanks to the fans who silently supported me and supported me no matter what difficulties and sorrows I had, I got stronger. I was able to do well and I was always happy just standing in front of the table tennis table. Once again, I sincerely bow my head and thank all the fans around the world. I also wish the fans happiness and I will always be with you in my heart. Finally, my dear family who have helped me a lot to be here. friend. To my teammates and the teachers who have guided me properly so that I can grow well from a young age. Thank you very much We look forward to seeing you again in the future