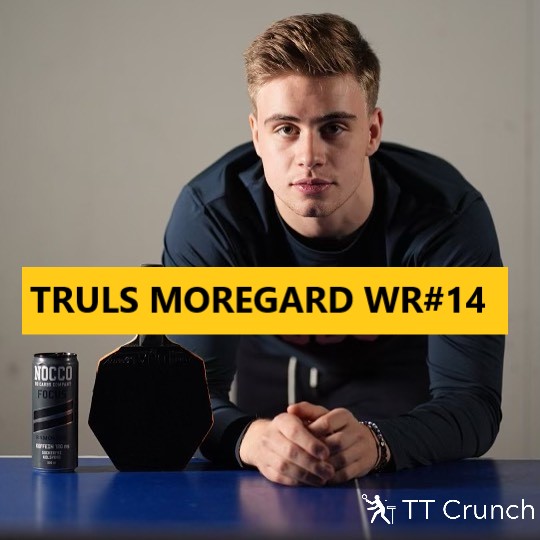 The 20 year old prodigy from Sweden has certainly improved his game and temperament which has allowed him to make comeback in multiple games in recent tournaments. Truls creative gameplay makes him one of the most interesting player of current era.

Recently Brazil’s Hugo Calderano reached his all time best world rank #3 and there has been multiple ranking changes in ITTF ranking where one of the biggest surprise was ranking change of China’s Xu Xin who dropped to Rank #9 from previous WR #2.

In year 2021, Truls reached the 2021 ITTF World Table Tennis Championships Finals in Houstan, USA and lost to the eventual champion and World Number #1 Fan Zhendong. His performance in that tournament gave him a huge confidence boost. He also got a huge jump in World ranking to #18 from his older WR #77 after defeating players like Nigeria’s Quadri Aruna, Germany’s Timo Boll. This was the second tournament where Truls used Stiga Cybershape racket.

In 2022, Truls reached the final of Europe Top-16 where he lost to Darko Jorgić of Slovenia. Truls defeated Timo Boll, Kristian Karlsson, Emanuel Lebesson in the same tournament and finally gained the ranking points. Darko jumped to 5 points and reached the World rank #12. Truls was seen using Cybershape racket in Europe Top-16 tournament as well.

Truls has been making progress in ITTF and WTT events, below are the current records of Truls Moregard.

SEE ALSO: Who Are the Greatest Table Tennis Players of All Time

Sweden is a name in table tennis that has a long history of competition with China in Table Tennis. The European Country known for producing legendary table tennis players such as Jan Ove Waldner, Jörgen Persson, Mikael Appelgran, Peter Karlsson, the list goes on with many players across generations.

Table Tennis is on rise in Sweden again with many new players competing and doing well in international events. Players such as Mathius Falck, Kristian Karlsson, Truls Moregard, Anton Kallberg are strong pillers of Swedish National Table Tennis Team and certainly growing tremendously under the leadership of Jörgen Persson.

Truls will be participating in WTT Singapore Smash 2022

The first-ever WTT Grand Smash will take place in Singapore this year with price money of USD2,000,000. Truls will be participating in this competition and certainly he would be one of the most interesting player to watch in this tournament.