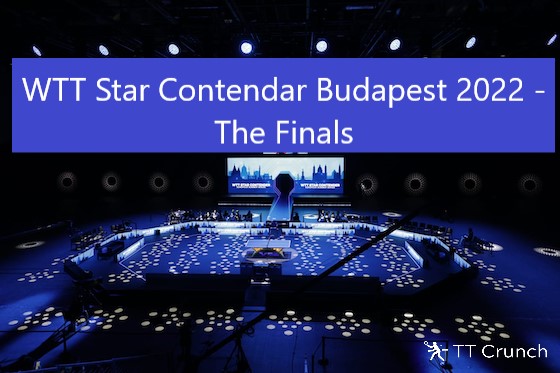 WTT Star Contender European Summer Series 2022, Budapest Hungary BOK Hall, it’s the final day of this super WTT event. And what an amazing event this has been in every category. There has been lots of upsets and we already have the champions of Mixed Double’s Category.

The final was between China’s Wang Manyu & Wang Chuqin vs Japan’s Tomokazu Harimoto & Hina Hayata. The Japanese team took the first to game lead and were dominating the game for the first two sets. But the Chinese pair took the next three sets with a scoreline of 3-2. Wang Manyu and Wang Chuqin took the crown of Mixed Doubles Champions.

The women’s doubles final is again between Chinese and Japanese team. China’s Wang Manyu & Sun Yingsha will play against Japan’s Mima Ito & Hina Hayata. Wang Manyu withdraw from Women’s Singles Semi final because of Knee Injury and to recover for the Double’s final. We hope she has recovered for the final event.

The Final will be between China’s Sun Yingsha and Wang Yidi. The Chinese star Wang Yidi defeated Japan’s Kasumi Ishikawa in 4-1 sets. China’s Yang Manyu withdrawn from the event as she was suffering from an injury and Sun Yingsha was declared winner of the semi final because of the opponent forfeiting the match.

In Men’s Category, The finals are between young talent from China And Sweden. In First Semi final, Sweden’s Truls Moregard defeated the WR #3 Liang Jingkun from China in a 4-2 battle. Liang took the second and fourth game but he couldn’t regain his rhythm in the next two games and 20 year Swedish player took the Final Spot. In the second Semi Final, China’s Wang Chuqin finally defeated two times single’s Olympic Champion Ma Long at a major WTT event. The game went down to a nail biting contest of 7 sets with Wang winning 4-3 and booking his spot in the finals.

The Men’s fianl battle will be between Truls Moregard vs Wang Chuqin!

Catch the finals on Day 5 at BOK hall, Budapest, Hungary. You can watch the live action at WTT website.